This company’s pasta products are perhaps the most successfully falsely advertised low carb foods on the market today.  They have permeated literally everywhere.  I say falsely advertised because the actual FDA required nutritional label is correct.  The label indicates 36g net carbs per 56g serving.  The problem is the advertised “protected carbs”. To be continued…On July 22, 2013 a class action lawsuit was filed against the makers and sellers of Dreamfields Pasta for false advertising.  Please see Mirakay et al. v. Dakota Growers Pasta Co., Inc. et al., Case No. 13-cv-04429, D. NJ.  Only the first 48 pages need be perused and you will get the gist of things.

Update: 07/16/14 To file your claim go to www.dreamfieldssettlement.com

Consumers will be reimbursed for Dreamfields purchases dating back to February 2004 under the terms of the deal, with overall claims capped at $5 million. Dakota will not oppose a $2.9 million fee award for the plaintiffs attorneys that will be paid..and here is the link to the Preliminary Settlement and Brief.  It’s a doozie.  All you people who were poisoned for years?…you can get back 29.85.  This was probably not your finest health investment. http://pdfserver.amlaw.com/nlj/pasta-deal.pdf

A huge problem as I see it. Can you see the difference in the labels? Not much and I seriously doubt most others will either. Click on the pictures and have a good look for yourself. The label on the left is the new one (13.25 oz.) and the label on the right is the old one (16 oz.) and apparently they are still allowed to call the pasta “Healthy Carb Living” which is absolutely disgusting. Dreamfields is allowed to use the same colorful packaging, it is still familiar to past customers, and “Healthy Carb Living” is attractive to any new prospective customer. How many millions of diabetics who eat this s*#t will continue? How many newly diagnosed diabetics (5,200 daily) will be drawn to this product? How many diabetics will never hear about the all but settled class action lawsuit? My guess…not many which means a whole lot of people (old and new) will continue poisoning themselves with this product. Dreamfields packaging is called “Product Recognition” (or branding) and boy oh boy is it so very important to every company.  Think McDonald’s yellow arches, Apple’s apple, Nike’s swoosh or Twitter’s bird. We all know and recognize these logos and it is my opinion the lawsuit missed this completely. On purpose? I don’t know and one can only hope not.

“Protected Carbs”?  Dr. Andreas Eenfeldt aka The DietDoctor pretty well sums things up:  http://www.dietdoctor.com/the-dreamfields-pasta-fraud  Does anyone out there know what a “Protected Carb” is?  I will tell you…it’s crap.  “Protected Carbs” is something Dreamfields made up…a fanciful pie in the sky if pigs could fly hoax, or as the good Doctor might put it “another fairy tale”. Dreamfields has been poisoning diabetics one portion (or more likely two) at a time for nearly 10 years. 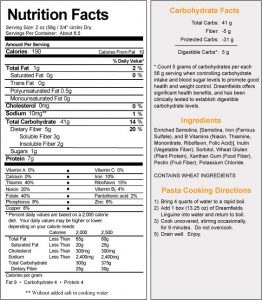 Take a good look at the FDA required nutritional facts label.  Just the facts ma’am.  Nowhere in the actual required label does it show or say anything about “protected carbs”.  That stuff is off to the side and as we all should know a food company may say any fanciful or lying through their teeth thing they want to anywhere on a package outside of the nutrition label and Dreamfields has certainly taken full advantage of this.

If you are eating these products you are smokin’ a pipe dream and delusion is the name of your game.  It is my best guess you are eating about double (112g) the measly two ounce (56g) portion stated on the label as a serving and taking in somewhere north of 70g net carbs.  For Pete’s sake if you want to eat pasta, by all means eat it but why not buy a less expensive pasta?  It is pretty much all the same.  I have made scratch pasta many, many times and there are 3 basic ingredients:  Semolina Flour, Egg, and a Pinch of Salt.

Make up your own mind which you would like to eat because pasta is pasta is pasta whether it is falsely advertised Dreamfields with a couple of FrankenFood ingredients added or Barilla, Ronzoni, De Cecco, American Beauty, or Creamette. This is a paper regarding Dreamfields Pastas published with the ncbi (National Center for Biotechnology Information which is part of the U.S. National Library of Medicine) in conjunction with the nih (National Institutes of Health and Human Services), and an agency of the U.S. Department of Health.  Frank Q. Nuttall, MD, PHD,1,2 Mary C. Gannon, PHD,1,2,3 and Heidi Hoover, RD, M http://www.ncbi.nlm.nih.gov/pmc/articles/PMC3024385/ Shelley Schlender interview with Nuttall/ Gannon on Dreamfields http://www.meandmydiabetes.com/2012/10/13/nuttall-gannon-dreamfield-pasta-low-carb-maybe-not-interview-includes-transcript/ If ever you have the time, and I mean a long time, read the information listed here http://patft.uspto.gov/netacgi/nph-Parser?Sect1=PTO2&Sect2=HITOFF&p=1&u=%2Fnetahtml%2FPTO%2Fsearch-bool.html&r=1&f=G&l=50&co1=AND&d=PTXT&s1=8128977.PN.&s2=20120306.PD.&OS=PN/8128977+AND+ISD/3/6/2012&RS=PN/8128977+AND+ISD/3/6/2012  This patent took them from the filing date of October 18, 2004 until March 6, 2012 and it means nothing.  Anyone who has the money and enough time can get a US patent and that is all it is-a patent.  It does not mean it is low carb or has anything called “protected carbs”.  A patent protects you from another company making essentially the same product and why would anyone infringe on this patent (See Breaking News at bottom of Julian Bakery Page regarding real patent infringement) when mankind has been making pasta since the late 1200’s and some say even before this. As you scroll through the above it is so much attorney science psycho babble and it looks as though they may not be listing all of the ingredients they are using.  If you get to it, it appears they may be using some of those Frankenfoods I will talk about. You can also Google Patent # 38898908 to read even further. If you don’t (or can’t) read all of the report at least read the garbled crapola in The Summary Of The Invention.  This will give you a good idea of what is in these products.  They talk of a “Food Film Network” and I ask you what is a “Food Film Network”?  Google that and see what you come up with-I can’t find anything but Dreamfields garbola. 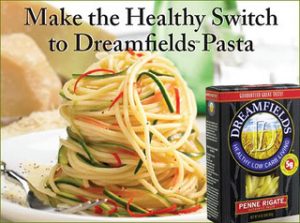 Dreamfields President Mike Crowley speaks gobbledygook with Jimmy Moore http://livinlavidalowcarb.com/blog/dreamfields-president-mike-crowley-we-stand-behind-the-nutritional-claims-of-our-product/10785  There are three 15 minute pod casts.  This guy is so, so full of it.  A fraudster if ever I heard one.  Maybe we should think of this fella as Peter Madoff, “Bernie’s” brother.  This picture of Dreamfields pasta is a stylized plastic model and about as real as “protected carbs”.

To this day Dreamfields has not done or published any studies using diabetics. You can listen (ad nauseum) to Mike Crowley, celebrity chefs, diabetic dieticians, and others anywhere on the internet touting the benefits of Dreamfields but you should ask yourself this question:  Are these people being paid somehow?  Rachael Ray is one endorser and she is paid for every

product she touts and there are many…Dunkin Donuts anyone? This is a list of the top 10 Celebrity Chefs earnings for 2011-notice where Rachael Ray fits in and you can bet she (or any of the others) gets paid for everything that comes out of their mouths regarding any product.  Its MONEY, MONEY and more MONEY and yes, MONEY truly does have a voice of it’s own.

At one time I was going to have these products lab tested and then realized; they are not falsely labeled, only falsely advertised.  I have done what many others before me have done-I have tested them on myself.

I want to emphasize that I DO NOT inject insulin and I DO NOT take any diabetic drugs which in my opinion makes me a perfect guinea pig to test any supposed low carb product. 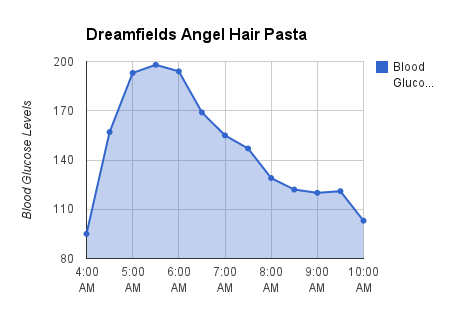 After eating 56g (recommended serving size) notice how very slowly my blood glucose levels came down-6 hours.  I don’t know about you and the carbs may be “protected” but me, I don’t feel so protected.  The way to stay protected?…don’t eat Dreamfields pastas. Think Dreamfields doesn’t target diabetics?-Well think again.  This is an ad that was directed at me on Google:   Yummy Pasta for Diabetics‎ Dreamfields Foods/coupon Dreamfields Taste Will Win You Over Low Glycemic Pasta, Only 5g Carbs.

And oh yeah, September 16th, 2013 it was announced that Post Holdings (your basic Post Toasties) is buying Dakota Growers for 370 million dollars, not exactly peanuts.  http://www.reuters.com/article/2013/09/16/glencore-dakota-growers-idUSWLA007NV20130916  I wonder if the new Post cereals will be made from Dreamfields “special protected carbs” process now. Why didn’t the FTC go after this company years ago? It seemed to me it was inevitable, that at some point, a lawsuit would be filed. Dr. Andreas Eenfeldt, Jimmy Moore, and Laura Dolson  are all cited in the lawsuit and I have contacted the law firm with my own information.