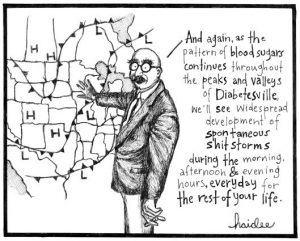 Diabetes:  The Grim Statistics.  If you think real food is expensive have you tried pricing diabetes lately?

There are about 26 million diabetics and about 80 million pre-diabetics in this country for a total of somewhere close to 106 million people. The total US population as of the 2010 census (the same year as the figures above) was 308,745,538 which means more than one third of us are diabetic or pre-diabetic and as we know, it is the rare person who slips out of these statistics. There are approximately two million new people added to that pool each year which means somewhere north of 5,200 newly diagnosed diabetics every day.

Newest diabetic figures released by the CDC-29 million diabetics-up 11.5% and 86 million pre-diabetics-up 8.5% for the now new total of 115 million people.  And guess what…these figures do not include anyone under the age of 20 years old.  So what do you think the real figures are?  My guess is a whole lot higher than 115 million.

The national cost of diabetes in the U.S. in 2012 was more than $245 billion and diabetes is the 7th leading cause of death.  Care for people with diagnosed diabetes accounts for more than 1 in 5 health care dollars in the U.S.  More than half of that expenditure is directly attributable to diabetes and new estimates show that by 2020 diabetes and pre-diabetes will account for an annual cost of almost $500 billion dollars-more than double what it was in 2012.  If current trends continue, more than 50 percent of Americans could have diabetes or pre-diabetes by 2020 at a cost of $3.4 trillion over the next decade.  $3.4 TRILLION in 10 years, are you kidding me?  2020 is only five short years from now and in the scope of time-not even a drop in the bucket. 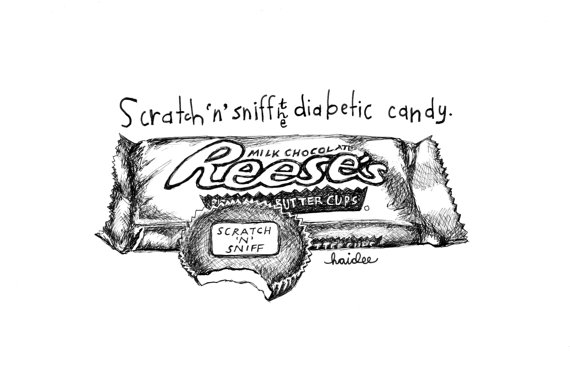 Diabetes is a national epidemic that, so far, has only grown worse. As more and more countries worldwide continue to adopt the western diet (junk food, french fries, soda pop, and fast food chains), with a lifetime of heavy carbohydrate laden food, they too are following in the diabetic steps of America.  I am, as an individual citizen, trying to make a difference in the lives of diabetics by insuring that all products are properly labeled.

I can not stress enough the seriousness of diabetes and its attending side effects.  Blood vessels within the body begin to constrict and harden resulting in poor circulation. Though this condition has the greatest impact on the feet and legs, it is also a contributing factor in heart attacks and strokes.

Diabetes effects include:  Numbness or tingling in your feet, and hands, swelling of feet, face, or legs, cramping or pain in the legs caused by cardiovascular problems, thrush, and if you are male, erectile dysfunction.  In the latter stages of diabetes there can be: kidney failure leading to dialysis, ulcers leading to foot and limb amputations, diabetic retinopathy leading to blindness, neuropathy, which can strike any part of the body (nerve damage causing excruciating pain) and liver failure.  Death from any of the above can be slow and very painful.

It is critically important that any diabetic know the number of carbohydrates they are about to ingest so that, if on insulin, they know how much to inject.  A diabetic like myself, who controls strictly by diet needs to know, because an overload of carbohydrates at any one time can send our blood sugars soaring which is what happened when I guinea pigged myself (knowingly) to test many of these products.  These companies have literally been poisoning thousands of diabetics one slice of bread or one meal at a time, day by day, year by year. 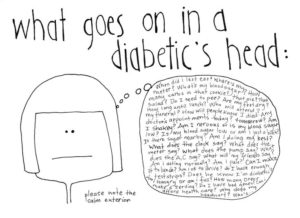 One of the first things, most diabetics do after diagnosis and the fog has cleared, is get on the internet to look for low carb breads and pastas.  It is what I did-not to buy bread but to find recipes to make my own.  Diabetics, as a whole, seem to be a particularly vulnerable group of people.  First they are slugged in the gut with a diagnosis of diabetes, most of them are immediately put on drugs or insulin and then told by the American Diabetes Association that they can still eat many of the foods that got them to diabetes in the first place.  They walk out of their doctors offices by the thousands with their minds racing, asking questions like:  What now?  Am I going to die?  Will I die in pain?  What can I eat?  What else can happen to me?    How many other doctors will I need to see? Is there anything else wrong we me?  How much weight do I need to lose?…the list goes on and on and as a vulnerable group it seems diabetics all crave one thing-more carbs and mostly in the forms of bread and pasta.  It may not even be the bread so much as everything that is eaten with bread.  One way to look at bread: a platform to eat other foods. They think:  You can’t have a sandwich without bread, you can’t have a pizza without a crust, and you can’t have a hamburger without a bun.  Perhaps in time they will come to realize that they can have all of the above.

OK, the grim statistics are pretty much out of the way.  Now to the culprits, & yes, there are some good guys.