Low Carb Spaghetti Squash 101. Somewhere on what has become this ridiculously large website, there is a place where I talk about the way I had always cooked spaghetti squash-which was almost never anyway because, gasp, I didn’t eat it much.  But I eat it all the time now and I have so many recipes using it I am going to list them at the bottom of the post.  So let’s get on to low carb spaghetti squash 101.

The biggest difference is how it is cut.  Anywhere and everywhere you go people are saying and showing how to cut the squash and I believe it is wrong.  After baking, the squash whole, it should be cut as shown it my picture and this is the reason why:  The strands of the squash go around and around and around.  If you cut the squash lengthwise you are cutting every strand in half.  Does that make sense?  I don’t have the foggiest idea how to tell you the number of servings per squash as there are so many variables.  As you can see I did two medium squashes at a time but I sometimes package them for freezing in differing weights so that depending on what I use them for, I have what I need when I need it.

I do 5 oz. portions for a stand alone vegetable, and 6-7 oz. for various other recipes, let alone some of you have bigger families with younger or larger (husbands) members.  For myself, I got nine 5 oz. servings from those two squashes and you will probably configure yours differently.  Remember:  It takes the same amount of electricity to cook two or three squashes as it does for one so plan accordingly. Mine were cooked for 1½ hours at 350°.  I scoop out the seeds and then with a large spoon, I go between the outside shell and the flesh around until most (and you can’t get it all) of it comes out in one lump. The picture above is simply squash with butter and poppy seeds-so easy-so good.

At this point in my life I cook two at a time for several reasons, time savings and as I said, I do not want to run out.  So there you have it.  Listed below are all the spaghetti squash recipes on the site and the squash freezes beautifully.

As I am a Type II diabetic, all recipes on this website are low carb and diabetic friendly. 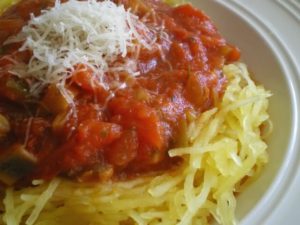 Low Carb Spaghetti Squash With Traditional Tomato Sauce. This is about as low carb as you can make spaghetti squash with tomato sauce. Tomatoes, if using enough to make a sauce, inherently have carbs and for that matter so does spaghetti squash.  I do not eat this often nor do I eat any more than one serving but it is so, so good and if you happen to have the Italian Dipping Oil Herbs you are already halfway home. One half order actually makes a very nice dinner side accompaniment. The sauce is also very good on Spaetzle.

Another great addition to this basic recipe is one of these wonderful Large Meatballs.

For a list of products you may not be familiar with and used on this site, please read Low Carb Pantry Essentials.  I am NOT sponsor-compensated for recommending a product that I use*** And here, in one tidy package, are over 550 Keto~Paleo~Low Carb~Diabetic Chef’s Recipes

As I am a Type II diabetic, all recipes on this website are keto-low carb and diabetic friendly.